Back Commentary Oct 5, 2016 By Winnie Comstock-Carlson

I was getting more hesitant as the hours passed. Would I run into unsavory people? How crowded are we talking? I imagined a potentially unsavory smell, and the chance my car might get broken into (the first new car I’ve had since my early 20s, which I care for like a second child). And, being inherently conservative, I wondered about the cost. My nerves were getting the best of me. It wasn’t until I called my mom and she told me, “Oh honey, don’t bother going. You don’t need to go,” that I finally rallied. You’re just being silly, I told myself. Do it. It’ll be a new experience, very fun. And what’s the worst that could happen anyway?

I’m talking about my decision to take light rail for the first time … and doing so alone.

This was well outside my comfort zone. I was scared I might get mugged, that my car could be damaged or broken into while parked at the station. I worried I would get frustrated, confused or lost. However, given the potential traffic issues in downtown Sacramento, this was definitely my best option.

And it was the true debut of the Golden 1 Center! A client of mine gave me a single ticket to sit in their suite for the opening night of the Paul McCartney show. I was elated to receive the gift. I’d never seen McCartney perform live before. Good grief, I thought, how is he going to pull off two back-to-back 3-hour performances at age 74, anyway? Well, it turns out he did it wonderfully, but I digress.

Still in need of a little assurance, I called the communications department at Regional Transit, where the new acting vice president of communications and partnerships, Devra Selenis, took my call. “This is a first experience,” I told her. “What can I expect?”  Selenis walked me very thoroughly through every step, telling me there would be extra security at all stations and on the train itself, my car would be safe, parking would be free for that night, trains would come every 15 minutes, I’d buy my ticket at the kiosk right at the station, there would be staff at every station to help guide me if I ran into challenges of any kind and, best of all, the ticket to ride as a senior would only be $3.50 round trip. This was sounding better than I had thought.

At the station, I struck up a conversation with one of the attendants, a nice young man.  He moved here from Australia about 10 years ago and told me he likes Sacramento better and plans to stay. I always love hearing good comments about Sacramento from newcomers, and I seek out that kind of commentary from all the business people that I meet who’ve relocated here. I’ve not met one yet that hasn’t fallen in love with our city. Many say people here are friendlier, more welcoming and more willing to accept others into the community than expected. I love that about our region.

Oops, I digress once again.

I see the train coming down the track. The attendant tells me where the buttons to open the doors, if necessary, can be found on the train. I wave goodbye to him and board.  Finding a seat was no problem. The train had come from Folsom and picked me up at the Power Inn Station. There must have been eight or 10 cars to this train, and the car I boarded had only about 10 people on it. I’d expected masses for this opening night of the concert, but maybe I left earlier than others. No matter, I opened up conversation with the couple sitting across from me. This was their first time on light rail too. They were excited about the performance and had decided they’d dine out after the concert.  We all commented on how clean and easy to access the train was, how reasonable the ticket prices were and how few people seemed to be on the train.

We stopped several times — passing the Capital Athletic Club where I play racquetball every week. This train could be a time saver if I rode it to the club instead of fighting traffic on Tuesday evenings, I thought. Maybe a good idea. We arrived at 8th and K streets, the doors opened and everyone got out. No fuss, no muss. Everyone was relaxed yet excited to arrive at the new Golden 1 Center. As I stepped onto the new David J Stern Walk, I thought to myself: Wow, this is really feeling like a city … a special and exciting city. Another woman walking near me said the same thing. 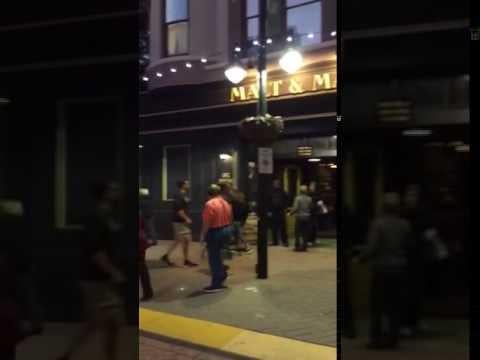 The Golden 1 Center and surrounding areas were lit up like Christmas trees. Concertgoers were everywhere. Business looked bustling every direction I turned. Inside was dotted with local food and beverage vendors. Plenty of staff were in place to greet, guide and answer questions for guests. Some were already sweeping and one was even polishing the call button at the elevator. No fingerprints allowed! I walked the concourse, looking at the menus at each stop – Selland’s, Café Bernardo, Block Butcher Bar, Paragary’s. It wasn’t until I reached Star Ginger that I found the first vegan item on any menu: a vegetable bowl. (Star Ginger appeared to be the only vegan option; I was hoping for a bit more.)

By now, you’ve all probably read about the concert: It was fabulous. McCartney was in great form. His rendition of “Live and Let Die” was incredible — with sounds, lights and superb pyrotechnics. Perhaps regular concertgoers are used to that kind of display, but I was not and found it all incredible. McCartney’s wife was in the audience. One of his songs was written by him just for her, and it was beautiful.

The entire evening was a grand celebration of not only a new sports and entertainment center, not only a world-class performer, but the beginning of a new era for our city. I feel a great deal of pride and much gratitude to all those who helped make this new era possible. It’s much like turning a page in history — and what a history Sacramento has had, starting from the discovery of gold in 1849. Changes upon change. But this page marks our willingness to finally get out of our own way, stop stepping on our own feet, and make way for new and exciting forms of change.

After the concert was a walk to the light rail station at 7th and I streets, where I stepped onto the arriving train. This time I was joined by perhaps twice as many riders as my trip in. The trip back was a mirror reflection of the trip in. It was dark, though, and nothing could be seen out the windows except the reflection of satisfied concertgoers. Arriving at the Power Inn station, I disembarked, noticing a couple security attendants. The walk to the car was a bit dark, but not in any way scary. I also noted a security person walking down one of the parking rows and immediately felt safe. My car was unscathed and I welcomed the sound of the engine as I turned the key.

All in all, a very good experience. I think I’ll do this again.

Winnie, I read your exerience with great interest. You did capture the moments and events with great detail and it made me feel as though I went through the experience with you. Well written. Well expressed with emotion and jubulation, both were there, as you seemed to be visiting your city with new interest from a new perspective.

Sounds like a great adventure and a fantastic evening!

Seems like you had a wonderful evening. I've never ridden the light rail either. I may be brave and give it a try sometime! But living in RM I seldom get to old Sac.

In which who didn't want to ride the same trains because she might run into poor people living our lives thinks the arena looks good for downtown. About what you'd expect.

It's safe to say that somebody who lives here for 10 years has actually decided to stay and therefore should not be called a newcomer...

"Many say people here are friendlier, more welcoming and more willing to accept others into the community than expected. I love that about our region."

and yet you were terrified of your own fellow citizens on RT? this article is brazenly classicist and frankly leaves a bad taste in my mouth. regular RT riders are not lesser nor does it do anyone any service to demonize them. i have ridden RT regularly for years and had no problems. get over yourself.

As someone who is intimately familiar with RT light rail, the bad taste is on you. Light Rail has been a home to unbathed vagrants, out of control criminals, filthy trains,mechanical failures, drunken brawls, theft, vandalism, etc... It's reputation is well deserved. Only recently has RT put their money where it belongs in maintenance, cleanliness and security. Your "classicist" is a senior citizen who had every right to be fearful of a trip downtown based on FACTUAL history. For someone who has ridden "for years" you seem to be well insulated from the true issues. Perhaps you never rode the blue line late at night toward meadowview or watt and stick to business/daylight hours to Folsom?

This is satire, right?

this article is unsavory

Yay Winnie! Another item to check off your bucket list (even if traveling via Sacramento light rail wasn't on your bucket list). I love that you called your mom (guess we are never too old to call our moms) and did just the opposite of what she suggested. Light rail sure was an affordable way to travel to downtown Sacramento.

Winnie, your article made me feel as though I was right there with you riding along! I'm looking forward to riding the next time I get up to Sacramento. The fears you expressed are reflective of what so many women face as they are concerned about personal safety in so many situations. I'm glad everything went so smoothly. Thanks for sharing your story!

Nice piece Winnie. Glad you pushed past your concerns to discover the world of public transit where good people go and had a wonderful time! Love how you bring the piece home. Also, heard it was a great concert and night for Sacramento.