The Golden Gate Bridge is one of the most famous crossings in the world. It’s not only a daily route for Bay Area commuters, it’s a destination bridge, much like the Tower Bridge in London, the Brooklyn Bridge in New York City and the Sydney Harbour Bridge in Australia. Tourists flock to these bridges, to drive or walk over them, and to take photographs.

According to the Golden Gate Bridge’s website, the 746-foot tall, 1.7 mile span that connects San Francisco and Marin County has more than 10 million annual visitors, and I have fond memories of being one of the reported 300,000 people who visited for its 50th anniversary May 24, 1987.

Though not nearly as grand or as popular, the pedestrian Sundial Bridge in Redding, built in 2004, has become a must-see attraction too. The glass-decked cantilever suspension bridge spans 710 feet across the Sacramento River and features one of the largest working sundials in the world. Redding officials estimate the bridge and Turtle Bay Exploration Park and its museum and arboretum attract about 300,000 visitors each year.

And we can’t leave out Sacramento’s Tower Bridge, with its distinct golden color and vertical lift, making it as iconic as anything in our region. When I attend Sacramento River Cats games or go to Drake’s Barn, I usually park in Old Sacramento and trek across the bridge into West Sacramento. And if you haven’t checked out a River Cats fireworks show from the bridge, you’re missing out.

Now the neighboring cities of Sacramento and West Sacramento have an opportunity to create another iconic — and innovative — bridge crossing the Sacramento River that will connect the burgeoning Railyards district on the east to the Washington neighborhood on the west, not only for drivers, but also for transit, cyclists and pedestrians. The I Street Bridge, built in 1911 primarily for trains, can’t accommodate  buses, there are no bike lanes and sidewalks are too narrow to meet accessibility standards. The current bridge will remain for train crossings, and possibly the top level will be converted for pedestrian use, if funding can be secured. 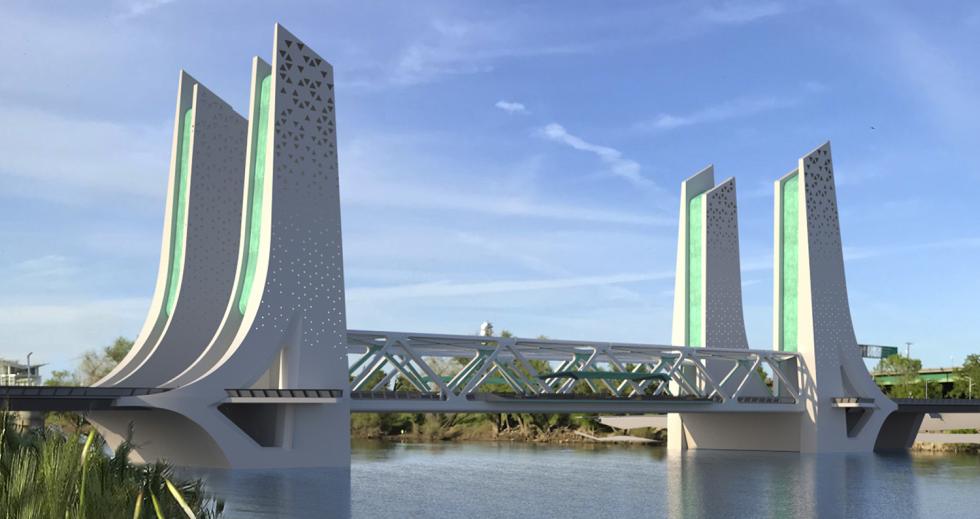 The final designs for the replacement I Street Bridge were unveiled at a public event in October. Each design emphasizes pedestrian and bicycle access. See the final designs...

Related: See the final proposed designs for the replacement I Street Bridge

The cities already have identified approximately $158 million in federal, state and local funding to cover the estimated $188 million to $210 million cost, depending on which design is selected. Officials hope to receive additional money from the U.S. Department of Transportation, through Senate Bill 1 (the “gas tax” bill signed into law in 2017) and from the Sacramento Area Council of Governments.

After T.Y. Lin International Group was hired in October 2018 to design options for the new bridge, nine concepts were announced during a community workshop in March. In July, four refined designs were presented to the public at River Walk Park in West Sacramento. Then, in mid-October, officials held a third community workshop — this one in Old Sacramento, with the Delta King and the I Street Bridge as a backdrop — to announce the two finalists — the Thru and the Spring — with two versions of each presented to hundreds in attendance. An announcement on the final choice is expected in January 2020, with construction scheduled to begin in 2021 and completion in 2024.

Both designs feature four towers used for the center lift that will accommodate boat traffic, similar to the Tower Bridge, and put an emphasis on pedestrians, with plenty of open space and seating areas to hang out and view the river. Both designs also feature bold lighting options on the towers and on the lifts.

“All the bridge options include bike lanes and sidewalks that are a minimum of 12 feet (wide), so it is truly a multimodal bridge,” says Jesse Gotham, project manager and a supervising engineer for the City of Sacramento. “You will be able to enjoy the river waterfront by walking or biking across the bridge. The options include connections to the existing and planned trails on both sides of the river. People will have an iconic user experience walking or biking the bridge.”

The new bridge will be more than just a way for folks to drive across the river. It has the potential to be as iconic as the Tower Bridge, but unlike the Tower, it also will be a place to linger and mingle. Imagine taking a basket and a bottle of wine (shhh, that might not be allowed) and having a picnic at sunset or under the stars. It also could become a must-see, must-cross attraction for some of the approximately 15.3 million annual visitors to our region.

“Regardless of the design that is chosen, the new I Street Bridge will not try to compete with the Tower Bridge,” says Noel Shamble, the lead architect at T.Y. Lin. “Tower Bridge is an integral part of the identity of the region, and it tells a vital story about the history of the area. The new bridge will tell the story about the current age. … It will turn the river into a stage, illustrating the rebirth of the Sacramento River as a civic amenity.”

Shamble says the bridge will be an “icon with street cred” — a functional workhorse for the community, with thousands of local connections daily. He says it will look as good for tourists as it works for the neighbors it will serve.

“This combination of local utility and landmark attraction is perhaps best epitomized by the Golden Gate Bridge,” he says. “It would be a high bar to compare our new designs against one of the most famous bridges in the world, but we hope that the new I Street Bridge will offer a different type of iconic bridge for the cities of Sacramento and West Sacramento to be proud of for generations to come.”

While all four versions will add a dynamic element to the Sacramento River, I favor the second version of the Thru design. Not only will pedestrians be able to walk through the towers, the towers sweep down toward both sides of the riverfront, minimizing the impact on the river’s natural beauty.

The four designs for the I Street Bridge replacement over the Sacramento River have been narrowed to two — each with two versions. The final selection is expected to be announced early next year, with the opening scheduled for 2024.